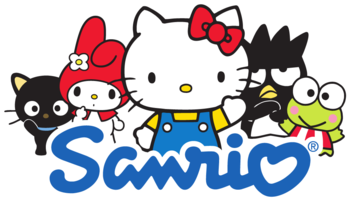 Founded by Shintaro Tsuji in August 10, 1960, Sanrio is a Japanese company, well known for creating various merchandise such as fashion, toys, and entertainment. The company is also well known for creating the Hello Kitty franchise. Sanrio started creating these types of characters beginning in 1974. The company also owns two Sanrio theme parks (three in China) across Asia; with "Sanrio Puroland" (an indoor theme park and shopping center) located in Tokyo, Japan in Tama City, and "Harmonyland" (an outdoor theme park) located in Hiji, Japan being their most popular theme parks. It's also the current company which owns Mr. Men and Little Misses series. A few anime shows were created in the mid 2000's starring popular Sanrio characters such as Onegai My Melody starring My Melody, Sugarbunnies, and Jewelpet (co-created by Sega Toys) named after the franchise of the same name, which stars Ruby, Garnet, and Sapphie.

Between the late 1970s and mid 1980s, Sanrio had its own animation studio called "Sanrio Animation" (sometimes known as "Sanrio Film"). The company's animation division was entirely dedicated to making animated films, animated shorts, animated shows, and works based on Japanese children's books, children's manga, and some original content. While Sanrio Animation was short-lived with a total of 10 animated films during it's run, their works were notable for focusing on darker topics, depressing subject matter, disturbing imagery, and explicitly avoided the use of their characters in order to be taken more seriously in the animation industry. Their 1978 film adaptation of Takashi Yanase's children's story Chirin no Suzu (Chirin's Bell) alongside their two feature film adaptations of Osamu Tezuka's Unico series note  and the 1979 animated pilot Unico: Black Cloud and White Feather to a lesser extent are Sanrio Animation's most well-known works that's still watched and enjoyed in Japan and the West.

is mostly dedicated to archiving Sanrio's previous music videos (Mainly for Puroland and Harmonyland) and animated content from the past.

On March 5th, 2019, Sanrio, along with Warner Bros., New Line Cinema and Flynn Pictures Company announced that they will be teaming up to develop an upcoming English language Hello Kitty film for a worldwide audience

. The film will be produced by Beau Flynn and executive produced by Wendy Jacobson. The partnership also marks the only time Sanrio has granted film rights to Hello Kitty and other popular Sanrio characters to a major film studio. On March 3, 2021 it was announced that the film will be a live-action/CGI hybrid

and will by directed by Jennifer Coyle and Leo Matsuda.

Other works Sanrio has animated under Sanrio Animation/Sanrio Film:

Sanrio and their works provide examples of: