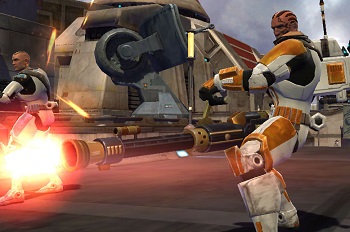 Bob has a Really Big Gun. It's noisy, destructive, and probably has an endearing nickname. But the main thing that shows everybody what a BFG it is... is the way he holds it.

With a chainsaw-style fore handle and a grip in the back, firing from the hip.

Now, this would be a really stupid thing to do in Real Life for various reasons, but in assorted media it has basically become the default way of depicting oversized man-portable weaponry. It can also be used specifically because it is stupid: to imply that the weapon is so devastating there's no need to aim, and/or that the wielder doesn't care about cover.

Realistically, any traditional gun heavy enough to require this sort of grip would need to be mounted to use as a weapon — the Browning .50 Caliber

is much smaller and lighter than any examples below, but a normal human cannot steady it against the recoil and muzzle climb. This can be somewhat more justified if the weapon in question is an Energy Weapon like a laser and recoil is a non-issue, or if the wielder is wearing strength-enhancing Powered Armor that makes them strong enough to compensate for the recoil. In the latter case, however, one has to wonder: if they're strong enough to use such a massive weapon, shouldn't they be strong enough to carry it properly?

Compare Gangsta Style and Guns Akimbo for firearms techniques similarly based on Rule of Cool. However, unlike those, this is not a grip by choice, but a set-up of handles built into the gun, and often there isn't any other way to wield it.