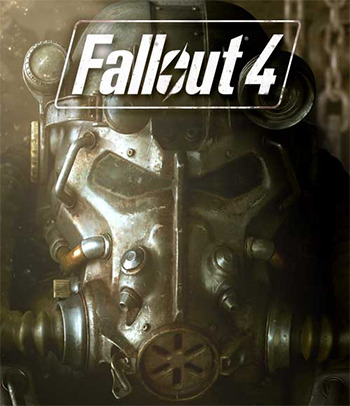 It's all over, but the crying...
"Time for a whole new life..."
— The Sole Survivor
Advertisement:

It's 2077, and Sanctuary Hills, Massachusetts is an okay place to live. You and your spouse have a beautiful home, a darling baby son, and even one of those fancy new Mister Handy robots to help out with chores. Times may be a bit tight, what with the food and medicine rationing, and the news says there's a lot of rioting about it in the cities, but surely that won't affect you out here. And sure, relations between the U.S. and China are less than ideal, but who cares? Alaska's been liberated, American troops are marching towards Beijing, and with your spot reserved in the nearby Vault-Tec fallout shelter, you can sleep comfortably knowing your family is prepared for the future.

Unfortunately, the future is now. After the local newscaster announces that the United States and China have launched hundreds of nuclear warheads at each other, you and your family rush to Vault 111, praying that you'll make it inside in time. As the elevator to the Vault descends, you catch a glimpse of a nuclear detonation to the south, and hear the shockwave pass over the closing entrance, eradicating the life you left behind. However, once you're inside the Vault, things start to deviate from what you expected — you're told by the staff to put on a strange jumpsuit and enter a "decontamination pod" before proceeding. Too shocked to question it, you step into the pod, and suddenly find yourself feeling very cold...

You lose track of time as your mind numbs. Everything goes dark, and you get the strangest sensation, as though years are passing by like seconds. For a moment, you swear things become clear again, your eyes making out the silhouettes of your spouse and son struggling against someone... followed by a gunshot. Eventually, your pod opens and you awaken. The Vault is littered with decaying skeletons and the frozen corpses of your neighbors... and your beloved. Your son is gone, and you are attacked by strange pests that have infested the halls. You shamble your way to the elevator, and return to the blasted ruin that was once your home.

This is the Commonwealth, year 2287. You are the Sole Survivor of Vault 111, and somewhere out there, you're gonna find some answers...

Fallout 4 changed the franchise formula significantly from the previous games, playing more like a fast-paced Action RPG In the Style of the Mass Effect and Borderlands series. The Player Character is now fully-voiced and, unlike past games, has a more clearly established backstory — previous games either allowed the player to choose their age (Fallout and Fallout 2) or explicitly established them as a young adult (Fallout 3) — here the Sole Survivor is a married parent from the pre-apocalyptic world. The Karma and Reputation systems were replaced with an expanded version of the Companion Affinity system, the skill system was scrapped in favour of more individual perks, and dialogue now consists of a four-option dialogue wheel. Combat was significantly overhauled, with grenades now being hotkeyed to their own button, Pistol-Whipping and bayonets in melee combat, the ability to sprint, and V.A.T.S. being altered from Time Stands Still to Bullet Time. The game also added the ability to build settlements across the Wasteland a la Minecraft, the "Legendary" system (where certain enemies are given special buffs to make them deadlier, but will also drop unique equipment on death with special boons), and improvements to the item crafting and modification systems from New Vegas.

Six pieces of DLC in total were released for the game, starting in February 2016. Two packs, Wasteland Workshop and Contraptions Workshop added new items for settlement building, including creature traps, logic gates, and advanced manufacturing systems. A third pack, Vault-Tec Workshop, was also largely a settlement-based pack; it gave you a new settlement, Vault 88 and a series of quests that opened it up, set down experiments, and cleared out the area for building. Automatron brought in the new mechanic of building robot companions and settlers, and had quests involving the connection between the appearance of murderous groups of robots around the Commonwealth and Fallout 3's favorite superhero, the Mechanist.

The last two DLCs were more traditional story-based expansions as seen in previous games. Far Harbor sends the Sole Survivor to a harsh island off the coast of Maine in search of a missing woman and gets them involved in the politics between the inhabitants. Nuka World takes place in the titular cola-themed amusement park which has been invaded by Raiders that want the park's territory for themselves, and need the Sole Survivor's help to reach their goals.

The game is still continuously updated and receives support, from minor bugfixes, a massive update completely overhauling Survival Mode (now making it Nintendo Hard), and even a surprise announcement of "Creation Club" in 2017. The Creation Club released concurrently with The Elder Scrolls V: Skyrim Special Edition, which features an entire microtransaction system and a variety of small quests and items (and some absurdly Game-Breaker weapons) now added through in-store payments, created both by hired modders and Bethesda Game Studios' own developers.

"Trope-Tec: Prepared for the wiki!"