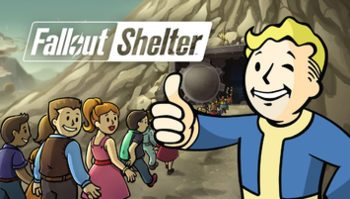 Start building today!
"When the bombs fall, most shelters will provide minimal protection against the horrors of nuclear war. Thankfully, Vault-Tec has manufactured a top-of the line underground shelter, to protect our friends and neighbors!"
— Launch Trailer
Advertisement:

Fallout Shelter is a vault management Life Simulation Game set in the Fallout franchise, designed for mobile platforms, developed by Behavior Interactive and Bethesda Game Studios and published by Bethesda Softworks. The game was released after Bethesda's first E3 showcase, on June 14, 2015. The game is free to play, with in-app purchases. The game is available for the iOS, and beginning August 12th, 2015, also for Android devices with Google Play Store access (the release coincides with the 1.1.0 update for iOS). Unfortunately, the game isn't available on the Amazon App Store, thus denying folks with uncertified Android devices access to the game. The game was later ported to PC, Xbox One, PlayStation 4, and Nintendo Switch.

In the game, you are put in the role of the Overseer of a Vault of your choosing (the number is selected by you), and the goal is to successfully lead generations of Vault Dwellers to survive and thrive in post-nuclear America — which means, at the bare minimum, making it an okay place to live. Your duties will include the acquisition and distribution of resources, development of the Vault complex, multiplying the population, prevention of crises (such as fires and raider attacks), and other similar activities.

The game is focused on balancing the needs of your Dwellers while providing them with the best quality of life (and defending it from threats). There is no end goal in the game, save building the biggest, best Vault you can. Managing resources and dwellers is essential - as is keeping them happy.

Has a sequel in Asia called Fallout Shelter Online

where the game shifted genre into an actionized auto-battler akin to Princess Connect! Re:Dive.