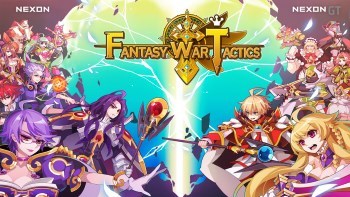 Become a Lord who dares to conquer the world! Recruit heroes and take over the world!
Fantasy War Tactics - also known as Fantasy War Tactics R in some markets and app stores - is a free-to-play mobile strategic role-playing game with in-app purchases, developed by Nexon GT and published by Nexon. It was released globally on November 5, 2015 for both Android and iOS.

After spending years perfecting his resurrection techniques on Mustache Island in the remote corner of the Arc continent, Lord finally manages to resurrect the legendary white knight Chris from her heroic genes - or a clone of her, at least. Lord soon gathers allies in the form of Ian the Cat, Alfred the Principal of Ketarh Magic School, and Sraka the orc. With his four allies of questionable loyalty they set out to reclaim the world from the World Reformation Council, who had the audacity to conquer the Elian Kingdom - before Lord could conquer it for himself!