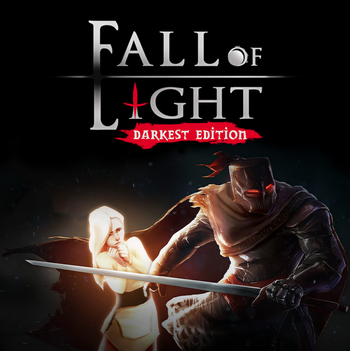 Fall of Light is an Action-Adventure / Hack and Slash game with a top-down perspective, developed by a two-man Italian studio RuneHeads in Unity, and released for PC through Steam on September 28th, 2017. A year later, the game was upgraded to Fall of Light: Darkest Edition, which was also released for Xbox One on August 14th, 2018, PS4 on August 21th, 2018 and for Nintendo Switch on August 30th, 2018.
Advertisement:

On the whole, it is heavily inspired by ICO and Dark Souls, as the developers freely admit themselves. It's set in a fantasy world where the battle between good and evil ended up with the latter winning. Hence, the world is claimed by the darkness to the point the Sun itself is dying, while most people have devolved into monsters, who are denied death for all eternity. However, a young girl named Aether has developed the ability to radiate light on her own. Her father, the grizzled warrior Nyx, is stunned and decides to take her to where the dying Sun still may shine.

Compare to DarkMaus and Shrouded In Sanity for the other indie attempts to recreate Dark Souls' mechanics with a top-down perspective, and Salt and Sanctuary, Void Memory, Gloom, Unworthy, Death's Gambit and Dark Devotion for the Side View games that have tried the same.

It is not to be confused with the 2018 Puzzle Platformer Light Fall.