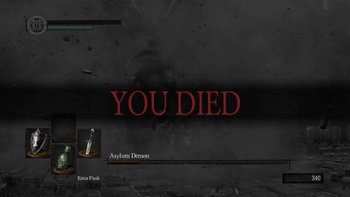 Prepare to Die
"Perhaps the game's greatest triumph, however, is that it takes qualities normally associated with frustration and discomfort—constant trial and error, slow progression, harsh enemies—and makes them virtues."
—Gamespot review

A Souls-like RPG refers to a subgenre of Role Playing Games that puts emphasis on dodging and moving over other mechanics. A relatively recent arrival to the gaming world, with the first unambiguous example being Demon's Souls, which was released in 2009.note A possible earlier example of the genre is Severance: Blade of Darkness, which was released in 2001 and features many of the elements later seen in Demon's Souls, but is still primitive in some areas. The genre gained traction with the release of Demon's Souls' Spiritual Successor, Dark Souls, which spawned numerous clones. Typically, these games have the following elements, or at least most of them:

Later games have more unique elements to help differentiate them from Dark Souls and its own Spiritual Successor, Bloodborne, such as a heavy focus on ranged combat or having multiple companion characters with their own fleshed-out Story Arcs. See also Action RPG, Roguelike, and Hack and Slash, from which the genre takes influence from. Contrast with Stylish Action games, which instead encourage the player to approach Nintendo Hard enemies with constant barrages of attacks rather than carefully timed moves.