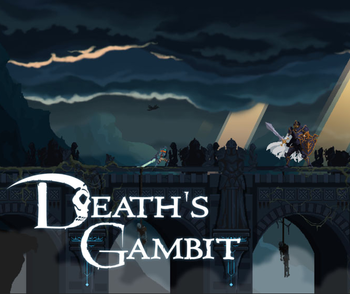 Death's Gambit is a Hack and Slash game that was created by White Rabbit, published by [adult swim] and released in August 2018.

You play as Sorun, a knight of Vados who led King Vaz' expedition to claim the source of immortality from the Caer Siorai citadel, located in Aldwynn, whose Lizard Folk inhabitants have long been immortal because of it, and would never give it up. Years ago, first his father, and then his mother, Everly, went missing in the previous expeditions. Now, his own group was wiped out without even setting foot into Aldwynn proper, since the endlessly regenerating Aldwynn's forces were led by the strange warrior named Endless, and supported by the Phoenix herself.

However, Sorun was suddenly resurrected by Death himself, and offered a contract that would see Death revive him endlessly, in the same way the source of immortality revives Aldwynn and anyone else in its orbit. This will be until he fulfills its one condition — to destroy the source of immortality outright. However, Sorun cares more about finding his mother, as well as getting revenge for his expedition on Endless.