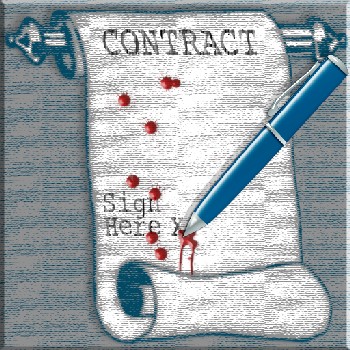 And don't bother to Read the Fine Print, sign already!
"Hey, she's got to. She's signed a contract. It's all down in red and white!"
— B.L. Zebub, The Devil and Daniel Mouse
Advertisement:

Blood is a powerful symbolism, and sometimes even has mystical powers. The Blood Oath makes use of this to make a commitment that can't be broken. (Or if it is, it's crossing the Moral Event Horizon.)

Bob has a secret he needs to get off his chest, but doesn't want it to be made public. Alternatively, he needs to be certain Al will do something for him. Either way, this is so serious that it requires making a blood oath. After all, once you're bound by blood, you can't break that promise, even if you're a villain.

In one common version, Al and Bob become Blood Brothers, cutting their hands open and shaking on the deal. (Don't Try This at Home; these rituals carry a risk of transmitting bloodborne infections like hepatitis and HIV.)

In another, Al cuts his hand open, and simply lets the blood drip to the ground. This is sometimes highlighted by the phrasing of the oath: "If I break my word may the Earth drink my blood!" Then giving the Earth a 'taste' of your blood so that it knows what to look for if you fail to keep your oath. Sometimes this version is used to swear an oath of vengeance- and making it clear that you mean business.

This is a subtrope of The Power of Blood. If it uses blood and binds you to an oath, then it belongs here.

Can overlap with Couldn't Find a Pen, which is any kind of writing in blood. Contrast with Heroic Vow. See also Geas and Rash Promise. May or may not involve actual Blood Magic. When someone has broken this vow so thoroughly they become ostracised they're The Oath-Breaker.