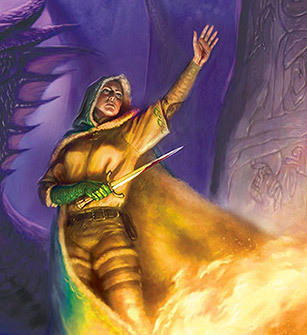 Begun by blood. By blood undone.
"Why do they always cut the palm? Hurts like a bitch..."
— Trevor, The Weekly Roll, "Religious Persecution Much?"

When magic spells call for blood, where do you cut? Right across your palm, of course. Because there certainly aren't any sensitive muscles or tendons there. Not an area packed full of pain receptors or anything. Plus, it heals super-fast, and you rarely use your hand anyway, right? Especially in the upcoming boss battle.

The main out-of-character reason for this trope is basically that it's the easiest kind of wound to fake.

Aside from all that, one has to consider the gravitas of the scene. Are there more practical body parts to nick for a bit of blood? Absolutely. Would it look nearly as dramatic or badass holding those body parts over some mystical chalice? Probably not.