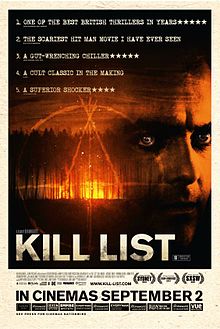 Jay is a former soldier and Professional Killer who's fallen on hard times. He hasn't worked since a disastrous job in Kiev eight months ago and his wife Shel is pressuring him to do something about their family's financial problems. So when Jay's best mate and business partner Gal tells him about a contract to assassinate a list of targets for a mysterious client, he reluctantly pulls himself out of retirement and takes the job. But it soon becomes clear that this isn't an ordinary hit list — the client insists on Jay signing the contract in blood and his victims take the time to thank him before their deaths. It's clear that Jay and Gal have been dragged into something far bigger and more disturbing than they could possibly have imagined...