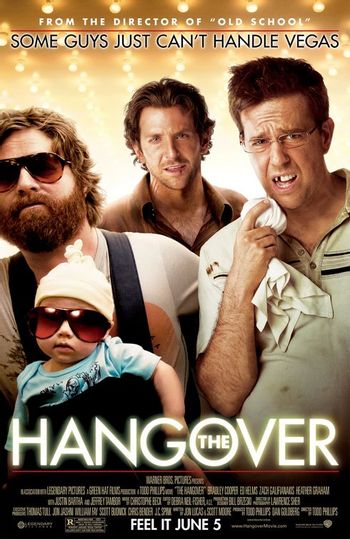 From left to right: Alan (and some baby they found a.k.a. "Carlos"), Phil, and Stu.
Alan: When we get together, bad things happen and people get hurt.
Chow: Yeah, that's the point: it's funny.
— The Hangover III, summarizing the entire series
Advertisement:

The Hangover is a 2009 comedy film directed by Todd Phillips (the maker of Old School and Starsky & Hutch).

Four guys drive to Las Vegas for a bachelor party, and the bulk of the film deals with three of the friends (Ed Helms, Bradley Cooper, and Zach Galifianakis) trying to remember the events of the previous night while trying to track down the fourth — the groom — using clues they have on their person. And Mike Tyson himself is involved. Hilarity Ensues.

The film won the Golden Globe Award for Best Picture (Musical or Comedy), making it the first "pure" live-action comedy — one that was not a musical or a dramedy — to win the award since 1993's Mrs. Doubtfire.

In 2011 The Hangover: Part II was released; it follows the three members of "The Wolfpack" from the first film as they wake up from another crazy night — this time, in Bangkok. The status of this film was in doubt due to a Frivolous Lawsuit over the use of Mike Tyson's tattoo by Helms, but Warner Bros. successfully got the lawsuit dismissed, and the film opened as scheduled.

The Hangover: Part III was released in 2013, in time for Memorial Day. The Wolfpack make their way back to Vegas, this time they're not just cleaning up their own mess, but trying to survive an angry rival of Chow's who wants them to find his enemy — or else. The writers promise that it will be the end of the Hangover Trilogy.

Stu stands up to Melissa

After all that Stu went through with all the controlling abuse, by Melissa. He finally stands up to her and gives Melissa a piece of his mind.

Stu stands up to Melissa

After all that Stu went through with all the controlling abuse, by Melissa. He finally stands up to her and gives Melissa a piece of his mind.