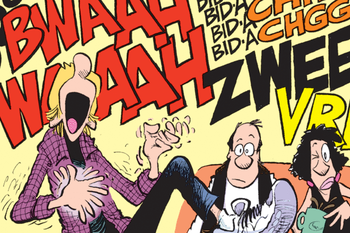 Making pretend guitar motions with your hands, placed as though you are holding an invisible guitar. Leaning is optional. Popular in The '80s, but still done. There are championships for this. People have sold air guitars on eBay for a sizeable amount of money. Some argue that the idea has since been replaced with the plastic hit, Guitar Hero.

No one's watching. Go ahead, rock along to that song that won't leave your head. We won't tell anyone.

Twin brother of the Air Drums. Less common versions are Air Violin and Air Piano; orchestral works usually elicit Air Conducting instead. Compare to That Syncing Feeling. A variant is the "substitute guitar". Tennis racquets and (in the UK and Australia) cricket bats are commonly used for this. See Instrumental Weapon when this is done with weapons.