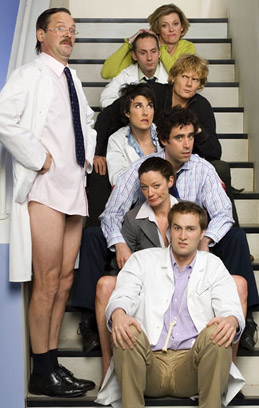 Green Wing was a British "medical" drama that ran from 2004-2006, and was a mixture of comedy, bizarre Soap Opera and pure absurdity that would make Scrubs blush.

The series was notable in that, despite being set at the fictional East Hampton Hospital Trust (and filmed in a real-live working hospital, complete with genuine patients and doctors as extras), the plot rarely ever touched actual medicine or patient storylines. Instead, it focused on the surgeons playing games mid-operations, the Love Dodecahedron the staff are invariably trapped in and the occasional misadventures of the HR department.

Some plots and tropes used: