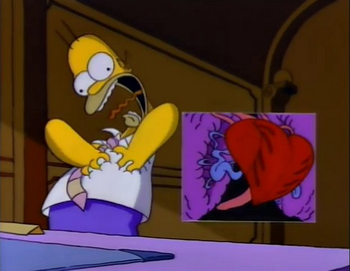 A CERTAIN ONOMATOPOEIA
"Oooo... It's the Big One... You hear that, Elizabeth... I'm comin' to you, I'm comin' home to join you, honey!"
— Fred Sanford, Sanford and Son
Advertisement:

Your character is going along in their daily life when suddenly they complain of a shooting, radiating pain in their left shoulder and arm. Within seconds they stagger, clutching at their chest while their face turns bright red, then they drop like a stone to the floor, unconscious and probably dead. Congratulations: your character's just had a Hollywood Heart Attack.

May be consciously averted in modern medical dramas if the writers care.

Real Life heart attacks vary in their nature, from instantaneous death to chest-clutching dramatics and flailing to ones you don't realize you've had until an ECG years later discovers the damage left behind. Some heart attacks will not even show up on an ECG, which is why Real Life cardiologists, when treating a suspected heart attack, will perform a series of additional tests in the event of a negative ECG reading. Some sufferers collapse; some don't. Some throw up; some faint. This is especially true for women; while some women do have chest pain, some of the more common heart attack symptoms in women are nausea, dizziness, heartburn, and feeling faint, and therefore many tend to go unnoticed, or mistaken for run-of-the-mill stress or indigestion because the symptoms are so vague. A massive heart attack can also make blood gather in the veins of the lower intestine and weigh it down, making the person feel like they have to use the bathroom. When you hear of people dying on the toilet, that is usually what happened. This also is why hospital bathrooms have emergency pulls by the toilets. Now you know.

Note that some examples go so far wrong as to call a heart attack "heart failure", which is a completely different condition that has to do with the heart's ability to efficiently pump the blood it receives.

"You almost bought it, boy. What is up with that?"

Skid and Pump visit Pump's grandfather, who they unintentionally scare into a heart attack. When they then tell him it's Spooky Month, he stops being in immense pain and does the Spooky Dance.

Skid and Pump visit Pump's grandfather, who they unintentionally scare into a heart attack. When they then tell him it's Spooky Month, he stops being in immense pain and does the Spooky Dance.