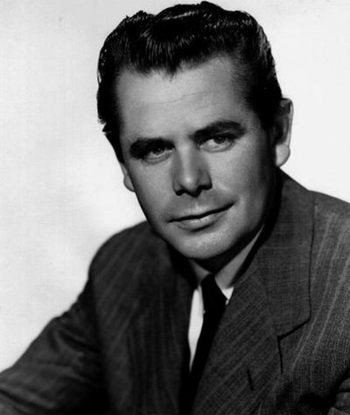 Gwyllyn Samuel Newton Ford (May 1, 1916 – August 30, 2006), better known as Glenn Ford, was a Canadian-American actor who made notable appearances in many movies during The Golden Age of Hollywood, such as Gilda and Blackboard Jungle.

Ford's family moved from Quebec, Canada to California when he was eight. When he left school, he did a variety of jobs, and joined theater groups. In 1939, he joined Columbia Pictures and debuted in the movie Heaven with a Barbed Wire Fence, which caught the attention of director John Cromwell, who offered him the leading role in the movie So Ends Our Night in 1941 alongside Fredric March. The movie was a success and catapulted Ford into one of the most praised newcomers in Hollywood of the year (and was even one of Franklin D. Roosevelt's favorite films, too), but he was annoyed that Columbia Pictures wanted him to star in westerns instead of other film genres.

During the World War II, Ford volunteered for the Marine Corps Reserve, and did a variety of other naval jobs between movies, such as a Coast Guard. He was awarded three medals for his service once the war was over and returned to acting full-time. In 1946, he starred alongside Rita Hayworth in Gilda, which was one of the first films to be entered into the Cannes Film Festival, and soon became a defining example of Hollywood Film Noir. In total, Ford and Hayworth appeared in 5 movies together and became close friends in real life.

Ford's career continued to flourish through the 1950s and '60s, and he was ranked the most popular Hollywood actor in 1958. He appeared in a variety of films of various genres, but also served in the army again, eventually becoming a commander and then a captain. In total, he joined the army three times, officially retiring in the 1970s, and received the Marine Corps Reserve Ribbon for serving in the US army for over 10 years.

For the rest of his life, Ford made several appearances on television and occasional cameos in movies. One of his last major roles was Jonathan Kent in Superman: The Movie. He won a variety of awards for his performances (including a Golden Globe) and was inducted into the Western Performers Hall of Fame for his appearances in western films. He married four times, including to actresses Eleanor Powell and Kathryn Hays, and had one child Peter. He died at 90 years old after years of mini strokes and failing health.