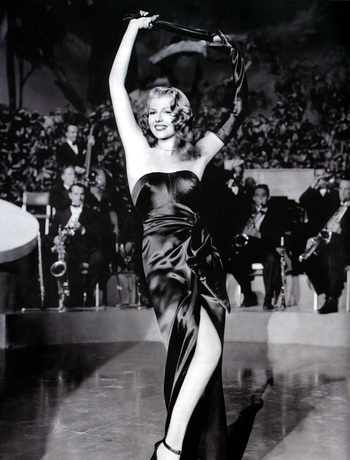 Removing a glove has never been so sexy.
Ballin Mundson: Gilda, are you decent?
Gilda: Me? [long pause] Sure. I'm decent.
Advertisement:

Gilda is a 1946 Film Noir directed by Charles Vidor, notable for its excellent cinematography and music, and particularly for Rita Hayworth's stunningly sexy performance as the eponymous Femme Fatale.

The story takes place in Argentina where a dice gambler called Johnny Farrell (Glenn Ford) ends up becoming the right-hand man of Ballin Mundson (George Macready), the owner of an illegal casino, who is constantly under the watchful eye of local authorities. The situation becomes more complicated when Johnny meets Ballin's wife, the nightclub singer Gilda (Hayworth), who was once his lover.

Struggling between his loyalty to Ballin and his hatred for Gilda, Johnny grows increasingly conflicted, which isn't helped when on the night he kisses Gilda, the event is witnessed by Ballin who flees only to seemingly plummet to his death in an exploding airplane. Saddened by his friend's demise, Johnny begins controlling Gilda's goings even more rigorously while the local authorities question him about details of certain cartel plans which Ballin has presumably been involved with.

Despite all of this, Johnny can't forget what he once felt for Gilda, but he can't be sure if Gilda shares his feelings. To make things worse, a shadow of the past still looms over them...