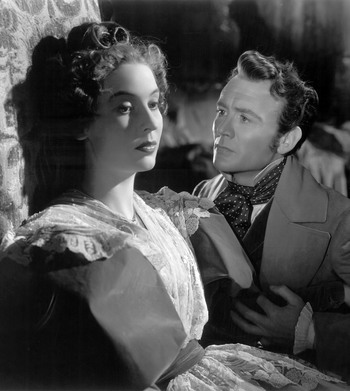 Great Expectations is a 1946 film directed by David Lean.

It is, of course, an adaptation of Great Expectations by Charles Dickens. It is the story of a boy named Phillip Pirrip, called "Pip". Pip grows up as a child in the care of his gentle stepbrother Joe Gargery, a blacksmith, and his much, much less gentle older sister, known only as "Mrs. Joe." One day when Pip, still a small boy, is visiting the grave of his parents, he is accosted by an escaped prisoner, Abel Magwitch. Pip does as he's told and fetches Magwitch some food and a file to hack off his chains, but Magwitch is eventually caught and sent back to prison.

Pip is eventually called to the mansion of Miss Havisham, a crazy old lady who has lived in one room for decades, since she was left at the altar by the man she loved. Pip for his part falls in love with Miss Havisham's adopted daughter, the beautiful but cold and heartless Estella. Pip has no hope for marriage with Estella, since she is a rich lady and he is a humble blacksmith's apprentice. But when a Mysterious Benefactor bestows on Pip some "great expectations"—namely, a large sum of money—Pip's life is turned upside down.