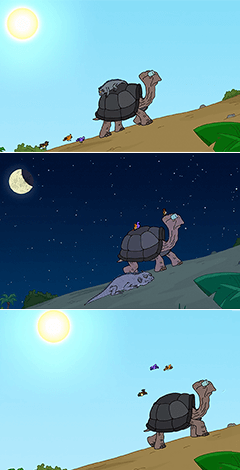 "Yes, after the moon coming up twice, and the sun coming up three times, I have done it."
— Dexter, Dexter's Laboratory, "Used Ink"

A montage where the position of the camera typically (although not necessarily, thanks to digital editing) remains the same, in order to emphasize the passage of time. This is a subset of the Time-Compression Montage and usually obtained by the Time Lapse technique.

A variation of this is a montage showing the pages of an old-fashioned paper almanac of days flipping over rapidly or being ripped off and fluttering away so that the printed numbers and names of the months seem to change in rapid sequence, to showcase how time flies. A common spoof is to reveal that in fact very little time (or at least, not as much as the montage would have implied) has passed. Frequently accompanies a Fast-Forward Mechanic in video games. Compare Age Cut.

Applejack waits for customers for a rather long time.

Applejack waits for customers for a rather long time.