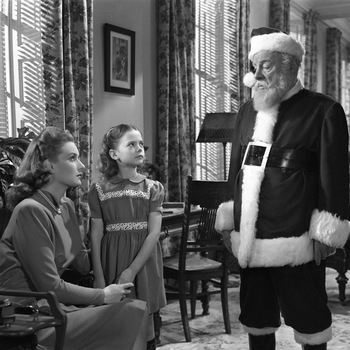 "Faith is believing in things when common sense tells you not to."
Advertisement:

That other famous heartwarming Christmas movie from The '40s, after It's a Wonderful Life.

It's December in New York City, and Macy's has hired a quiet but charming old man named Kris Kringle to be their store Santa for the holidays. Thing is, Kris clearly sees himself as something far more than a mere seasonal employee; he tells customers where to find a better price on a toy (even if it means sending them to competing stores), converses with immigrant children in their own languages, and even claims to be the real Santa Claus!

R.H. Macy is incensed... until he sees just how much goodwill Kris is building with the store's customers, and with the public at large. Everyone soon becomes content to let Kris have his harmless fantasies; everyone, that is, except the store's resentful staff psychologist, who attempts to have him committed to the psychiatric ward. Things subsequently come to a head in a big, showy trial, where the defense decides to argue that Kris is not insane even though he claims to be Santa Claus—because he is Santa Claus!

An important subplot revolves around Doris, the store PR manager who hired Kris, and her young daughter Susan. Susan has never believed in Santa Claus because her bitter divorced mother doesn't want her to indulge in fantasies, but meeting Kris causes both of them to start wondering. There's also a romance subplot between Doris and Fred, Kris's defense attorney.

The original film version, released in 1947, was directed by George Seaton and starred Edmund Gwenn as Kris Kringle, Maureen O'Hara as Doris Walker, Natalie Wood as her daughter Susan, and John Payne as lawyer Fred Gailey. It was a box office success, won three Academy Awards (for Gwenn's supporting role, Seaton's screenplay, and Valentine Davies' original story), and is shown on television around Christmas each and every year.

(Gwenn was later a charter member

of the International Santa Claus Hall of Fame!)

Due to the success of the original film, the story has been adapted three times for television and once as a Broadway musical (Here's Love). The most notable television version was produced in 1973 and starred Sebastian Cabot as Kris, Jane Alexander as Mrs. Walker (renamed "Karen"), David Hartman as lawyer boyfriend Bill Schaffner, and Roddy McDowall as the psychologist Dr. Sawyer, with a lot of smaller roles being filled by 1970s TV mainstays such as Tom Bosley playing the judge. There was also a theatrically-released remake in 1994, written by John Hughes; Richard Attenborough was cast as Kris, with Elizabeth Perkins as Dorey Walker, Mara Wilson as Susan, and Dylan McDermott as lawyer boyfriend Bryan Bedford.