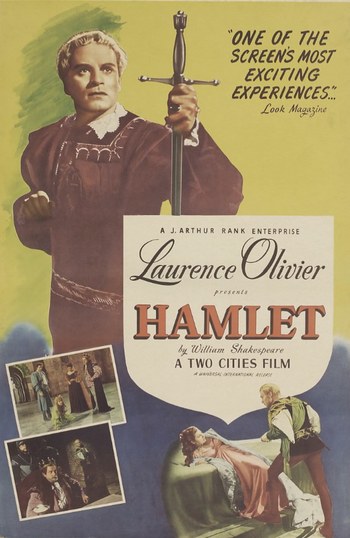 Hamlet is a 1948 film directed by, and starring, Laurence Olivier.

It is—how did you know?—an adaptation of William Shakespeare's Hamlet. Hamlet, Prince of Denmark (Olivier) is all bummed out because his father, King Hamlet, died two months ago. King Hamlet was succeeded by his brother, Claudius, whom his nephew Prince Hamlet strongly dislikes. Much worse, barely a month after King Hamlet was in the ground, his widow Queen Gertrude married her former brother-in-law Claudius. Prince Hamlet does not like this one little bit.

Palace have seen a ghost of Hamlet's father, walking in the night. When Hamlet goes to see for himself, the ghost tells him some very disturbing news. It seems that King Hamlet did not die of natural causes as everyone assumed, but was murdered by Claudius, who poured poison in his ear and thus took his brother's life, throne, and wife. The ghost, who is not happy about all this, makes Prince Hamlet swear to avenge him.

The second of three big theatrical Shakespeare adaptations that Laurence Olivier directed and starred in, following his Henry V and succeeded by his Richard III. Contained several future stars of British and Hollywood film. Jean Simmons appeared in her Star-Making Role as Ophelia, Hamlet's girlfriend, who probably should have dumped him. Patrick Troughton, later known as the second Doctor Who, appears as the Player King. This was the first of twenty-four films that Peter Cushing and Christopher Lee appeared in together; Cushing plays Osric while Lee is an extra (one of the guards). Patrick Macnee also appears as an extra. Character actor John Laurie plays Francisco, one of the guards in the opening scene who sees the ghost.