Winning Over the Kids 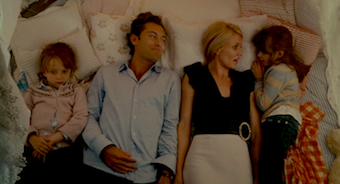 Look at her bonding with the children!
"I read someplace that the surest way to meet the mother is to be kind to the child."
— Fred Gailey, Miracle on 34th Street
Advertisement:

When you find out the hottie you just met has adorable kids, it becomes up to you to bond with the offspring of your beloved. Most likely, you will win over the heart of the single parent in question by demonstrating your super winning (step-)parenting skills. This may be a step in your plan for Romancing the Widow.

You may also become a Parental Substitute for kids whose busy single parent doesn't always have time for them; it's not always about getting in the parent's pants, it may also be a sincere bond with the rugrat in question.

You Called Me "Dad"

Steve spends time with his estranged stepson Matt on a trip through England.

You Called Me "Dad"

Steve spends time with his estranged stepson Matt on a trip through England.