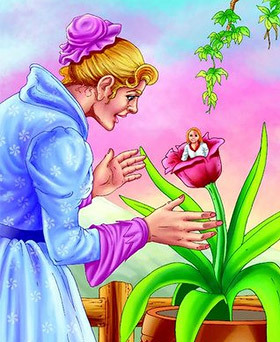 Jonathan Kent: Kids don't just fall out of the sky, Martha.
Martha Kent: Then where did he come from?
Jonathan: I don't know. But he must have parents.
Martha: Well, if he does they’re definitely not from Kansas.
Jonathan: Sweetheart, we can't keep him. What are we gonna tell people, we found him out in a field?
Martha: We didn't find him. He found us.
— Smallville
Advertisement:

Biological clocks are nothing new. The childless older woman or older couple has been a staple of folklore and Fairy Tales. Typically, one's first introduction to such a character will be the phrase, "Character X had always wanted a child." Which, of course, guarantees infertility.

However, in the realm of fairy tales, this is never the end of the story. Through The Power of Love, wishing, Moses in the Bulrushes, or some other supernaturally-empowered device, a child will come into the life or lives of the poor, childless person or couple. However, due to the unusual circumstances of his or her birth, the child given to the couple is a little bit... unusual. They have amazing magical powers, or they have a strange appearance, or something similar. This is the Wonder Child.

While a Wonder Child often appears from some supernatural source or is conceived in some magical circumstances, they are, occasionally, merely adoptees whose real parents were significantly less mundane, resulting in Muggle Foster Parents. Regardless of their origins, they frequently have some sort of quest or goal to fulfill by the story's end. Compare Changeling Fantasy, though the two can overlap.

If their appearance is unusual, they often feature as the Shapeshifting Lover; either the wedding transforms them or inaugurates a time when they can switch back and forth.

The term comes from folklorists; strictly speaking the wished-for child is the Wish Child, and the marvelous child is the Wonder Child, but they have always had substantial overlap.