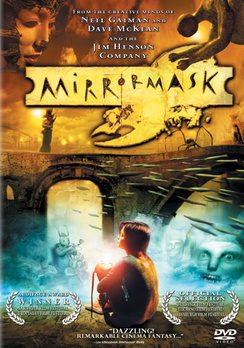 A 2005 movie made by The Jim Henson Company, but done with mostly CG effects. Directed by acclaimed visual artist Dave McKean, and it shows. Written by acclaimed author/comic book guy Neil Gaiman, and it also shows.

Helena Campbell is a teenage girl who wants to leave her home at the circus to go and join real life. She gets into an argument with her mother, who then falls spontaneously ill with what is presumably a brain tumor. Helena blames herself, and dreams (maybe) that she travels to a magical world made entirely out of pictures she has drawn.

The City of Light is being gradually destroyed because the White Queen (who bears a suspicious resemblance to her mother) has fallen ill and the Charm to wake her has been stolen by someone called the Dark Princess, daughter of the Dark Queen (who also bears a suspicious resemblance to Helena's mother). Accompanied by a bizarre Irish juggler named Valentine, Helena journeys from the White City to the Darklands to find the Charm and save both the White Queen and her mother.

Deliberately made as a Spiritual Successor to Labyrinth, and like it, the film has gained a cult following, due largely to the massive fan bases of Gaiman and McKean.

By the way, the circus isn't scary, nor is the clown.