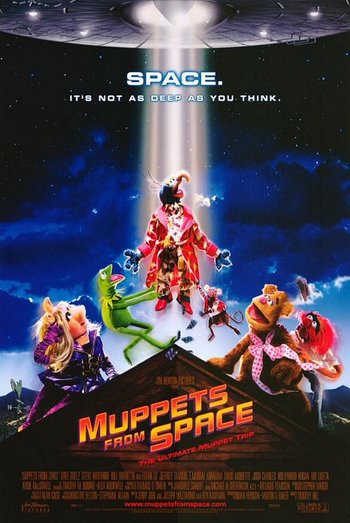 Space. It's not deep as you think.
"Kermit is a frog. Fozzie is a bear. Gonzo is...what exactly is Gonzo?"
— The Hub's commercial for this movie
Advertisement:

Muppets From Space is a 1999 Muppets movie starring their regular cast of characters, focusing on Gonzo's back story. It is directed by Tim Hill. It is so far the only Muppet movie to not be a musical, with the score being filled with already-popular oldies soul and funk (some of which are covered for the film), and the first Muppet film since Jim Henson's death that has an original story and is not a spoof/tribute to a popular work of literature, its humor based on the more recent Muppets Tonight show. It also has the distinction of being the last Henson-related film featuring Frank Oz before he retired his characters to successor Eric Jacobson, and the Muppets' last independently-released feature film before they were bought by Disney in 2004.

In this film, the Muppets are living communally in an old house (apparently it's their vacation home), with Piggy's motivation to become a successful TV reporter being the only clear source of their income. Gonzo feels lonely, because there's no one like him; he has friends, but no family, and everyone else does. Feeling despondent, he is contacted through his breakfast cereal (no, really) and told to watch the sky. Eventually, he is convinced that he is actually an alien that somehow wound up on Earth; elated at the thought that there may be more of his kind in space, he tries to communicate with the other beings, while being thought of as crazy by his friends. Between being duped into building a Jacuzzi for the aliens, being captured and interrogated by a anonymous government agency headed by Jeffrey Tambor, and nearly being dissected by a (Muppet) Mad Scientist, it takes a while before Gonzo finally gets to meet his space-brethren.

It received mixed reviews, with some minor backlash, though the majority seem to consider this to be a fairly good Muppet film. It also seemed, for a while, that it might be the last of its kind - the next film would not come for another twelve years!

Within the Muppets continuity as a whole, Gonzo has stated that the concept of him being an alien was just made up for this movie

Statler: I wonder if there really is life on other planets?
Waldorf: Why do you care? You don't have a life on this planet.
Both: Do-ho-ho-ho-hoh!