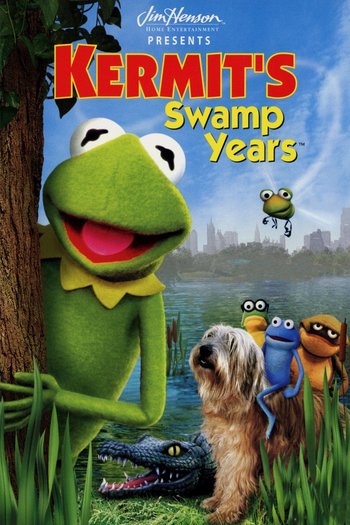 Kermit's Swamp Years is a 2002 Direct-to-DVD movie that serves as a prequel of sorts to The Muppet Movie, following Kermit's years of living in the swamp in Mississippi before he decided to travel to Hollywood.

It opens in the present day with Kermit moving right along on his motor-scooter to visit his old family in the swamp, and then he starts to narrate his tale to the audience of one particular adventure he got involved in when he was only a boy. He had two playmates, Goggles, a nervous, cowardly toad with glasses, and Croaker, a smooth, confident frog. Said adventure involved a confrontation with two human frog hunters, Goggles getting frog-napped, a dog named Pilgrim, and an ordeal through a pet shop, through downtown, and climaxing in a high school classroom where they dissect frogs!

It is produced by Columbia Pictures and Jim Henson Home Entertainment. Even though it is not as popular as most of the other Muppet films, it contains various mythology gags and nods to Jim Henson's legacy.