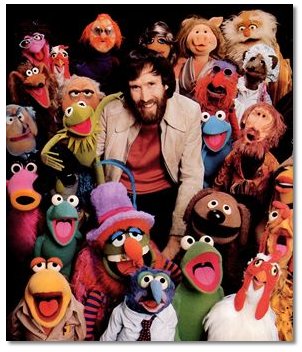 How come when he makes up imaginary friends, it's cool, but when I do it...
"When I was young, my ambition was to be one of the people who made a difference in this world. My hope is to leave the world a little better for having been there."
Advertisement:

James Maury Henson (September 24, 1936 — May 16, 1990) was an American puppeteer, filmmaker, voice actor and actor born in Greenville, Mississippi. Widely regarded as one of the greatest puppeteers in modern history, Henson was the creator of the world-famous Muppet characters, and used the art of puppetry to reach heights of popular success and artistic acclaim undreamed of by anyone in his field before or since.

In 1955, WRC-TV 4, a Washington, D.C. television station owned by NBC, began airing a short five minute puppet show named Sam and Friends. In addition to the manic title character and a skull-like omnivorous creature named Yorick, it featured a lizard-like creature (made from an old green sweater and a pair of ping pong balls) named Kermit. This was the humble beginning for Kermit, who would eventually be refined in his design into a frog with a collar.

Kermit, Sam and the other primitive creations of this show were the first Muppets, and Sam and Friends, as well as the concurrently produced commercials for Wilkins Coffee, both proved to be smash local hits, which set a new standard for puppetry. Henson's techniques of setting the camera's point of view right at puppet level rather than using a traditional puppet show stage, and using a TV monitor so a puppeteer could see his own performance, were the first in a series of innovations he and the team of talented men and women who came to work for him made in the field. Even then, Henson initially considered puppets simply as a means of getting on TV with dreams of moving on to other TV careers like art direction. However, a vacation in Europe exposed him to a whole new world of puppetry as a deeply respected artform and Henson realized he found his calling after all.

When Sam and Friends ended, Henson moved on to producing commercials for national advertising campaigns. Meanwhile, The Muppets became popular features on variety shows, once even taking over The Ed Sullivan Show for a Christmas special, as well as Jim's character Rowlf the Dog being a regular on the Jimmy Dean Show. Henson even experimented with non-puppet films such as the surreal short, Time Piece which was nominated for a Live Action Short Oscar. However, it wasn't until Joan Ganz Cooney and a show brought to you by the letters "P", "B" and "S" came into the picture that the Muppets would become an institution.

Sesame Street launched dozens of characters who are now a part of the worldwide consciousness, including Jim's own characters Ernie and Guy Smiley. The program would also solidify the core performers he'd work with for years to come. Frank Oz, Jerry Nelson, Richard Hunt, Caroll Spinney, Fran Brill, and later David Goelz, Steve Whitmire and Kevin Clash all performed characters too numerous to mention here that are just as memorable as Henson's own. In fact, Henson and Oz, whether performing Bert and Ernie, or Kermit and Fozzie Bear, or Kermit and Miss Piggy, or the Swedish Chef (Henson did the head and voice, while Oz did the hands) rank as one of the most prolific comedy duos in television history, and barely ever appeared on screen as themselves. Unfortunately, the success of Sesame Street caused a lot of people to see the Muppets as strictly "kid's stuff," a notion that Henson worked to dispel (with varying degrees of success) for the rest of his life.

In the mid-1970s, after both a season performing new characters on Saturday Night Live and a couple specials that would serve as pilots, The Muppet Show launched in first run syndication in the US, and on ITV in the UK, having been bankrolled by British entertainment legend Lord Lew Grade (who had previously bankrolled another puppeteer, Gerry Anderson). Like the early variety show appearances, the Muppets used Slapstick so over the top it's a wonder Moral Guardians of the time didn't have a heart attack from all the explosions, Muppets eating smaller Muppets, and general mayhem surrounding the Muppet Theatre. Henson, in addition to Kermit and Rowlf, performed characters ranging from trippy keyboardist Dr. Teeth to the unintelligble and amateurish Swedish Chef, to the masculine and very dense Link Hogthrob. He also performed Waldorf to Richard Hunt's Statler, giving the theatre its heckling, cackling and long suffering Greek Chorus.

A couple years later, Henson took a major gamble, bringing his characters to the movie theatres with the aptly named The Muppet Movie. Much like Walt Disney with Snow White and the Seven Dwarfs, Jim knew he had to top anything his team had put out to that date. Complex sequences, ranging from Kermit riding a bicycle to the Electric Mayhem rocking an old church to its rafters, made the Muppets believable in a more or less undiluted real world setting. The movie was a critical and commercial success, paving the way for The Great Muppet Caper and The Muppets Take Manhattan.

Later Henson-helmed projects were met with more sporadic success. Fraggle Rock was one of the earlier successes in its initial run on HBO. While the show was produced by him, neither Henson nor Frank Oz took on regular recurring roles in it, instead opting for Jerry Nelson, Steve Whitmire and others to take the lead. Two big-screen efforts into non-Muppet fantasy arrived in The '80s — The Dark Crystal was a minor success, but its spiritual successor Labyrinth was mostly considered a disappointment in terms of its financial record. (Both films went on to be Vindicated by Cable.) The Jim Henson Hour, which would feature segments from another series, The Storyteller, only lasted for about half a season.

In the meantime, Jim Henson's Creature Shop had become a major font for further advancing puppetry. Building on full body characters like the Gorgs from Fraggle Rock, the Creature Shop was responsible for the title characters of the 1990 movie version of Teenage Mutant Ninja Turtles, and its first sequel Teenage Mutant Ninja Turtles II: The Secret of the Ooze. As well, the Shop also did forays into CG animation, namely Waldo, a gusty experimentation of a manually-controlled virtual 3D character who appeared in both The Jim Henson Hour and Muppet*Vision 3D which runs at Disney Theme Parks to this day.

Jim Henson died suddenly of toxic shock syndrome following a severe strep throat infection on May 16, 1990 — the same day as Sammy Davis Jr., by sheer coincidence. At the time, he was negotiating with Disney to turn over the rights to his characters so that he could focus on production and performing, and did not wish to visit the hospital (his wife Jane would later state that the refusal was likely due to his desire not to be a bother to people). He was 53 years old. In a sense, this was the End of an Age for the Muppets.

While Sesame Street still runs strongly, as it was not affected by the sales and resales of The Jim Henson Company and its properties that persisted into the Turn of the Millennium, the Muppet Show cast had a spottier record via all the turmoil. Muppets Tonight, which set to update the concept of The Muppet Show for the 1990s by introducing new characters, a new host, a new setting, and new skits, only lasted for two seasons before falling into obscurity. New film productions were largely overlooked. Other productions by the Jim Henson Company and its performers, ranging from Dinosaurs and Farscape to Bear in the Big Blue House and Dog City, more successfully continued Henson's legacy with new characters for new generations of fans. Jim's legacy also lives on through the many puppeteers, filmmakers and creative artists who worked with, or were taught by, him or members of his team, as well as countless generations of people who grew up with his work, many of them future puppeteers for both The Jim Henson Company in Los Angeles and Sesame Workshop.

Disney has owned The Muppet Show and its characters since 2004. The 2011 Muppet film set out to keep the original cast of The Muppet Show fresh without changing them as characters, and proved successful enough to warrant a sequel in 2014. (A few photos of Jim Henson are visible in the film, including a large one of him and Kermit in Kermit's office.) Otherwise, the "classic" Muppets have been making fewer and shorter appearances in other media, such as a YouTube channel of original skits. The Jim Henson Company in New York City produces mainly CG series, internet material, and the puppets for Sesame Street, the representative characters now owned by Sesame Workshop. And then in 2015, they came back to TV once again.

His memorial service was pretty awesome

. The downside was that it was never televised.

The 1993 coffee table book Jim Henson: The Works by Christopher Finch (a book Henson himself conceived and authorized shortly before his death) is a good overview of his life and career, filled with hundreds of pictures. Also well worth checking out is Brian Jay Jones' more formal 2013 biography of him, the result of unprecedented access to Henson's family and co-workers, and the YouTube mini-series Defunctland produced about Henson's life and works.

Tropes related to Jim Henson include:

To try and win over his audience, Fozzie makes a joke about the sinking of the RMS Titanic. Waldorf thinks it's funny, but Statler, who happens to be a Titanic survivor, is offended.

To try and win over his audience, Fozzie makes a joke about the sinking of the RMS Titanic. Waldorf thinks it's funny, but Statler, who happens to be a Titanic survivor, is offended.