Spoilers are unmarked. Read at your own risk. 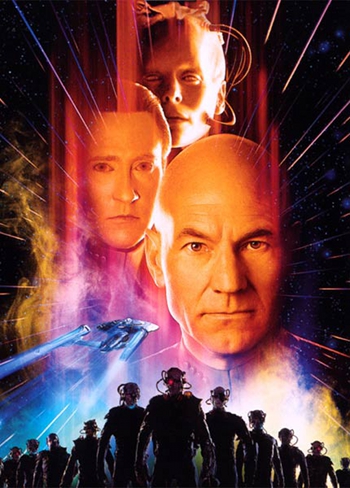 Resistance is Futile.
"I will not sacrifice the Enterprise. We've made too many compromises already, too many retreats. They invade our space, and we fall back. They assimilate entire worlds, and we fall back. Not again. The line must be drawn here! This far, no further! And I will make them PAY for what they've done!"
— Captain Jean-Luc Picard
"Borg? Sounds Swedish."
— Lily
Advertisement:

The one where the Borg Time Travel to Make Wrong What Once Went Right.

Star Trek: First Contact is the eighth movie in the Star Trek film series, released in 1996.

The most popular Next Generation villain, the Borg, make another attempt to assimilate Earth. The newly-commissioned USS Enterprise-E scrambles to confront them, only to learn that the Borg have decided to use Time Travel to stop Earth's First Contact with aliens and Take Over the World, thus preventing The Federation from ever existing. Arriving above Earth in the year 2063, the Borg aim to stop Zefram Cochrane, the inventor of warp drive, from making his historic flight.

Captain Picard is having none of that. An away team (led by Riker, Troi, and Geordi) immediately beams down to Set Right What Once Went Wrong, discovering in the process that the man their history paints as a visionary luminary was really a cynical drunk who just wanted to get rich. Regardless, they work to restore the damage the Borg caused and make sure that first contact goes as planned.

Meanwhile, as if the remaining crew didn't have enough problems, they soon discover the Borg have invaded the Enterprise and are slowly assimilating it. Picard, who was assimilated by the Borg in the TNG two-parter "The Best of Both Worlds", is a little unstable, and becomes moreso as the plot progresses. His third-in-command, Data, isn't of much use either, as he's been captured and brainwashed by the Borg Queen.

Often seen as one of the best of the series—let alone the best TNG film—as well as a major step-up from Generations. Continued with Star Trek: Insurrection.