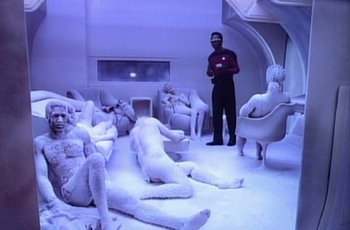 The Enterprise comes across the science vessel SS Tsiolkovsky (which looks peculiarly like the USS Grissom from Star Trek III: The Search for Spock—apparently, The Federation doesn't update their designs much) to find the entire crew dead. It turns out they were all acting crazy and died when someone blew the hatch. The bodies all look like the ones from the TOS episode "The Naked Time"; Geordi finds the body of a woman who was taking a shower with her clothes on, causing him to start sweating and acting strange. Can you see where this is going? Riker does and enlists Data to look through their library to find out where he's heard about something like this before. When even the characters notice the episode is a rip-off, you know you're in trouble.

Dr. Crusher decides that Geordi should be confined due to his strange behavior. Naturally, Geordi is left unsupervised and unconfined, and he wanders off. Meanwhile, Wesley has decided to take recordings of Picard and Twist the Words to make it sound like he's putting Wesley in command. Geordi, of course, doesn't see any problem with this and compliments Wesley on his ingenuity. Data finds the relevant information after much difficulty (apparently Google didn't survive to the 24th century) and then the episode ends. No, of course not—this is a mutation immune to McCoy's antidote. Instead, Yar gets infected from Geordi and Troi from her. Yar becomes hot for Data and improbably infects him. Troi throws herself at Riker, who takes her to Sickbay and infects Crusher. Crusher now wants to get it on with Picard. Interesting how the infection causes the women to get horny, but not the men.

Wesley has also been infected from Geordi and inevitably the first thing he does after losing his senses is hijack the ship, using (you guessed it) that recording of Picard which was totally innocent fun. To make matters worse, the star whose collapse the Tsiolkovsky was supposed to be examining is starting to... well, collapse. Picard is forced to ask Captain Wesley to save the day and Wesley cheerfully decides to follow through. Wesley realizes Data can put back the command chips removed by the infected assistant chief engineer at super speed. This still doesn't give them enough time, so Wesley throws the Tsiolkovsky into the way of the core fragment with the tractor beam. By this time, the elder Crusher has developed a modified vaccine and the day has been saved.

Sadly, unlike many of the finer episodes of the show, our description is better than the work itself. Trust us on this one!