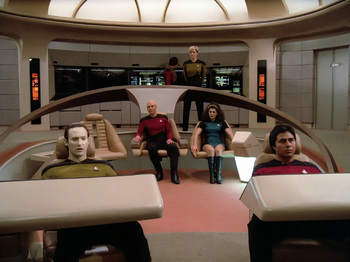 Hey, doesn't Data sit on the other side?
Advertisement:

The Enterprise-D is out on its maiden voyage to Deneb IV to pick up Commander William Riker when suddenly she encounters a giant space net of some description, and a being that calls himself a "Q". After a reflex action results in the freezing of a Red Shirt note literally, although TNG would later switch to goldshirts for this (he gets better), Q decides to challenge the crew: If they can prove that mankind has put aside their savagery "nonsense", he'll let them go. The challenge involves them solving the mystery of Farpoint Station, an outpost on Deneb IV that has been the site of some absolutely bizarre goings-on, mostly in the guise of apples that appear from nowhere and fabric that suddenly changes texture. Of course, all is not as it seems, and the head of Farpoint Station, Groppler Zorn, has a lot to answer for.

The year is 2364. The United Federation of Planets is enjoying a period of unprecedented peace and exploration, and the crown jewel of this period has been launched: the Galaxy-class USS Enterprise, NCC-1701-D. She's captained by Jean-Luc Picard, a forty-year veteran of Starfleet and one of their most distinguished officers. His crew is a handpicked ensemble of Starfleet's finest, including an android (Lieutenant Commander Data) and a Klingon (Lieutenant Worf), a sign of the Federation's alliance with the Klingon Empire. For her maiden voyage, the Enterprise has been assigned to visit the Bandi on Deneb IV, a planet on the edge of explored space. It seems they have constructed a space station (on the surface) and they're appealing to join the Federation.

Suddenly, the voyage is interrupted by a vast energy grid blocking their path. Picard orders full stop, and the crew is startled by someone who flashes onto the bridge. The being declares that humanity has gone too far into the galaxy and they are to return home at once. Identifying himself simply as Q, he demonstrates his powers by blocking security from entering the bridge and freezing a redshirt (though non-fatally). Picard and Q engage in philosophical debates as the former tries to explain how humans have grown up from being a "grievously savage child race." Nevertheless, he inadvertently gives Q an idea and the being departs. Worf recommends they fight while Security Chief Tasha Yar recommends escape. Thinking quickly, Picard decides to see just what a Galaxy-class starship is capable of and orders them to jump to maximum warp. A Sphere of Fear gives chase and eventually starts to overtake the Enterprise. The Captain orders all civilians into the saucer section, which separates while he takes the stardrive against Q. However, recognizing that he is outmatched, Picard broadcasts a surrender.

Suddenly, Picard, Troi, Data, and Yar find themselves in a late-21st Century court. They are heckled by the audience and threatened by armed soldiers until Q arrives, dressed in regal attire as the court's judge. He presents the charges against Picard, that humanity is a savage race. Despite promising a "fair trial," it's quite clear that the Q have already made up their mind. He has the soldiers put their guns to the defendants' heads and demands they plead guilty. Picard does so, but only provisionally. He asks Q to test humanity, to see if this is still true of humans. Q is intrigued and agrees this, noting that Farpoint Station will make an excellent test.

We then cut to Farpoint itself, and meet Commander William Riker, formerly of USS Hood and ready to assume his position as first officer of the Enterprise. He goes to meet with Groppler Zorn, the administrator of Farpoint, and asks some questions about how the Bandi were able to build the facility in such a short time despite having no advanced construction techniques. Zorn attempts to deflect this by offering some fruit. Riker asks if he has apples, to which a bushel of apples suddenly appears. After the human leaves, Zorn begins cursing an unseen force.

In the market place, Riker meets with Dr. Beverly Crusher, the new CMO, and her son, Wesley. He starts to talk about the strange occurrence in Zorn's office, but Crusher is distracted by a bolt of fabric. She off-handedly mentions it would look lovely with gold, and it suddenly has a gold pattern on it. Soon after, they get word from Lt. Geordi LaForge that the stardrive section of the Enterprise has arrived. Riker is signaled to beam aboard.