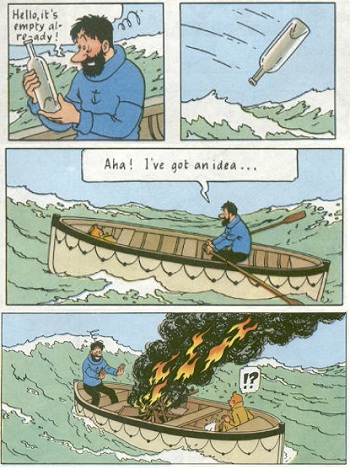 Not exactly what they meant by burning your boat.
Stan: So you just built your store on an Indian burial ground?!
Store owner: Oh, hell, no. First I dug up all the bodies, pissed on them, and then buried them again upside-down.
Kyle: Why?!
Store owner: Why? I don't know. I was drunk.
— South Park
Advertisement:

Incidents of jaw-dropping stupidity brought about by a character's excessive consumption of alcoholic beverages.

This tends to overlap with In Vino Veritas: Often, the character committing the act of alcohol-induced idiocy will be an otherwise sensible and reasonably intelligent person when sober. If the character is normally dimwitted, getting drunk will make him even dumber. In both cases, the character's inebriation usually results in him being a danger to himself and others.

Someone who becomes a Drunken Master when intoxicated is the direct opposite, though sometimes these tropes can alternate (e.g. a rock musician who is more capable drunk onstage than sober, but then gets beaten up after picking a pointless fight he has no chance of winning the moment he gets offstage) or can even co-exist (the thing the drunken mastery is of something that someone in any kind of rational mental space would not do, e.g. walking a tightrope above a guaranteed fatal drop without safety gear, wrestling an actual bear). Liquid Courage tends to be a more positive occurrence.

Alcohol-Induced Idiocy can be similar to the Idiot Ball or any other plot device that depends on Contrived Stupidity. Thus, this trope is related to Too Dumb to Live, Idiot Ball, Out-of-Character Moment, What Were You Thinking?, and Phlebotinum-Induced Stupidity. The only difference is that this trope comes with a built-in excuse.

Can often lead to a character getting an Embarrassing Tattoo… or doing something much, much worse. Some of the other results of Alcohol-Induced Idiocy are covered in the What Did I Do Last Night?, You Wake Up in a Room, and Sorry Ociffer tropes. May overlap with Youth Is Wasted on the Dumb. Once the character sobers up and is taken to task for their actions they may attempt to explain that It Seemed Like a Good Idea at the Time.

In comedy works, we (the audience) might not hear all the details of what happened while a character was under the influence, just humorous and tantalizing hints to feed our imaginations.

The Alcohol-Induced Idiocy trope can also be used as An Aesop about the dangers of over-consuming alcohol and drunk driving.

Unfortunately, instances of Alcohol-Induced Idiocy are so common that this is Truth in Television.

In an attempt to lighten Mrs. Krabappel's mood up, her students spike her coffee with alcohol, which, indeed, causes her behaviour to be completely different.

In an attempt to lighten Mrs. Krabappel's mood up, her students spike her coffee with alcohol, which, indeed, causes her behaviour to be completely different.