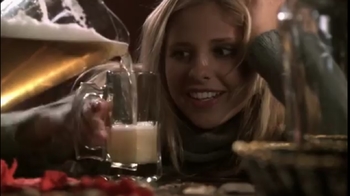 Buffy is still hurting because Parker Abrams dumped her after a one night stand. In a daydream during one of Professor Walsh's classes (about the role of the id in Freudian psychology) she saves Parker's life and he swears to do anything to get her back. A dialogue with Willow later shows how much Buffy is not over him yet.

In the real world, Xander uses a fake ID gets a job as a bartender at the on-campus pub. Buffy stops by the pub and sees Parker entertaining a girl at one of the booths. She bumps into Riley, who gives her the lowdown on Parker's womanizing habits. Buffy pulls up a stool at the bar, where Xander is having some difficulty getting into the groove of the job. Fed up, Buffy is getting ready to leave when she is stopped by several college boys who insist that she join them in enjoying some beer. Meanwhile, Oz and Willow are in The Bronze together, but he seems to have a connection to the singer Veruca when she gets on the stage with her band Shy.

The next morning, Willow doesn't just have to cope with Veruca having called her a "groupie" when Oz introduced them and the feeling that Oz is mentally absent, but also with Buffy — who seems to be suffering from "Black Frost" in more than the usual way. She seems to be dumbing down more and more just sitting watching a Luscious Jackson video. That evening when Buffy drinks herself further and further into idiocy we get a glimpse why: Jack has a chemical lab set up and is putting more into the beer than just malt.

Xander finally sends Buffy home, but her four drinking buddies decide to stay for a while longer. Colm leaves to go to the bathroom and soon emerges as a violent Neanderthal. The Neanderthal rushes at Xander and knocks him out. Xander wakes up to the Neanderthal leaning over him and the other three students cowering on the other side of the room. The Neanderthal emits a primal yell and the other three are overcome with violent convulsions. Backs hunch over, brows thicken, arms grow longer and more muscular, voices deepen, hair on their head and facial hair becomes long, dirty, and wild, and they gain hairy chests, backs, arms, legs. The four Neanderthals surround Xander, who chases them away with his lighter. The four Neanderthals are now loose in the world. Xander finds out that the owner of the pub has been brewing something as revenge for twenty years of college kids taunting him. While the boys escape to the streets of Sunnydale, Xander gets Giles to help. They find Buffy drawing cave paintings on her dorm wall saying "Parker bad!" Giles and Xander are unable to keep Buffy in her room when she gets a craving for more beer.

Meanwhile, Willow confronts Parker with what she says he has done to Buffy. He turns his charm on her, and she seems to be swayed by it, but then she reveals she has been playing along with a rant about how primitive men are — just when the four Neanderthal students burst into the room. They knock Willow and Parker unconscious and start a fire that rapidly burns out of control. Xander catches up with Buffy and when they see smoke from the Neanderthals' fire, they rush to help.

Though afraid of the flames and unable to figure out how to use an extinguisher anymore, Buffy saves Willow and — after hitting him — Parker. In the end, Parker thanks Buffy for saving his life, and apologizes just the way she had daydreamed it — just to get knocked unconscious by Buffy's club, much to the approval of the rest of the gang.