"Buffy, I've gone through some fairly dark times in my life, faced some scary things, among them the kitchen at 'The Fabulous Ladies Night Club.' Let me tell you something, when it's dark and I'm all alone and I'm scared or freaked out or whatever, I always think, 'What would Buffy do?' You're my hero."
— Xander Harris 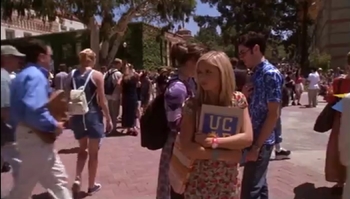 Buffy and Willow are on a stake out in a cemetery and are discussing which classes Buffy should take for her first semester at college. They talk about the fact that Buffy has left choosing her classes to the last minute. Buffy puts it down to Giles telling her to keep her identity of being the Slayer a secret. They're so engrossed in their discussion that they don't notice the vampire they've been waiting for has quietly slipped away after noticing them carrying weapons.

Buffy arrives the UC Sunnydale campus, ready to select her classes and move into her dorm room. However she is overwhelmed by the general number of people around as well as various students handing her leaflets and posters. Buffy meets up with Willow and Oz and reveals her feeling of being disorientated by the new experience. Willow, on the other hand, is excited about it and is enjoying every second. Oz seems unfazed by the situation as his band are studying there too. He does say that he doesn't have a clue what's going on though.

Buffy and Willow tour the campus library and meet up with Giles, who tells them that he's enjoying his free time now that he's no longer a Watcher or a librarian. Xander is still away for his summer cross-country trip. As Buffy and Willow explore the library, Buffy tries to reach for textbooks on a top shelf and accidentally knocks them off. They hit Riley Finn on his head, leading to his introduction as Buffy's teaching assistant in Professor Walsh's 'Psych 105: Introduction to Psychology' class.

Buffy arrives at her new room in Stevenson Hall. She's already moved in and her new room-mate Kathy is in the process of doing so. Kathy tells Buffy that she thinks she's cool and that she thinks this year will be 'super fun'. She then hangs a poster of Celine Dion on the wall much to Buffy's dismay. During the night, Buffy's sleep is disturbed as Kathy snores, talks and smacks her lips in her sleep.

The next day, Buffy attends a class to see if enrollment is still open however the professor humiliates her and throws her out when she finds out she isn't registered. Later on, Willow and Oz attend Psych 105 with Buffy. They're taught by Prof. Maggie Walsh and Riley is present as teaching assistant. She introduces herself to the class and explains that if they're in her bad books, they'll come to know her as the 'evil bitch monster of death' but if they're well-behaved, they'll know her as simply Maggie. Buffy is unnerved and realises college will be much harder than high school was.That night, Buffy meets another student named Eddie who is just as overwhelmed by the college environment. Buffy and Eddie discuss their need of a 'security blanket' in unfamiliar surroundings. Eddie reveals his is a novel named 'Of Human Bondage' and Buffy tells him of Mr Pointy but doesn't elaborate on what it is. They go their seperate ways with Buffy glad in the knowledge that someone else is also having trouble adjusting.

Unfortunately, Eddie's luck runs out as he bumps into a gang of vamps led by a woman called Sunday. The vamps break into his dorm room later on and clear it out, leaving a note by the bed.The next day, Buffy searches for Eddie in her Psych class. She goes to his dorm room and sees it empty with the college attendant explaining some people don't handle college life well and bail early. As she sits on the bed, disappointed that the only person she'd connected with has left, Buffy notices the novel sat on the desk. Buffy knows that Eddie would never have left without it and suspects something is wrong.

In Sunday's lair, the gang go through Eddie's belongings. Sunday complains that they don't go after cooler people and they get ready to go on another evening's hunt. Just then, Eddie's eyes snap open.

Buffy visits Giles' apartment to find a half-dressed woman in his apartment. The woman visitor is called Olivia and is a friend of Giles, clearly having known him for some time. Buffy tells Giles of the disappearance and insists that they must do some research but Giles is reluctant to help. He reminds Buffy that he's no longer her Watcher nor does she have one anymore. Buffy sadly leaves with Giles reminding her that he will always be there for her if she's desperate.