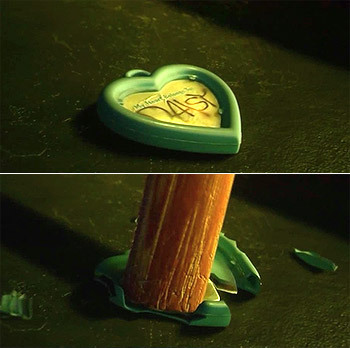 "Don't be such a BABY!"
Advertisement:

What is one of the worst Kick Them While They're Down things a villain can do to show how far past the Moral Event Horizon they've crossed? Easy: After giving The Hero a No-Holds-Barred Beatdown and leaving them a bloody pulp in the dirt, they see the hero desperately reaching out for something in front of them. It could be a Tragic Keepsake, an Orphan's Plot Trinket, or a Memento MacGuffin. Whatever it is, it means a lot to the hero, so what does the villain do? Right when it's in reach of their fingers, he smashes it to bits under his foot. For extra cruelty, he might stomp on it multiple times or just grind it under his boot before scraping the fragments off the bottom.

Apart from being cruel, a villain sometimes does this to demoralize the hero, as it has sort of a symbolic theme behind it: the destruction of their precious Plot Coupon representing that the hero has failed and hit rock bottom; the one thing that kept him going is gone, so there's no hope left, thus making it a literal Hope Crusher. Other times, however, the villain just made a big mistake and causes the hero to go into an Unstoppable Rage.

If the villain does it incidentally while doing a Power Walk, it's Trampled Underfoot. See also Wrecked Weapon, Weapon Stomp, Agitated Item Stomping, Symbolically Broken Object. Related to Smash the Symbol and It's All Junk. Subtrope of Kick the Dog.

WARNING: Since this trope is often invoked before or during the climax, expect spoilers below!