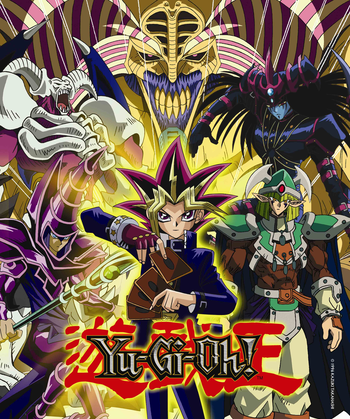 Let's Duel!
"I made a wish on that puzzle... for friends I could count on... friends who could count on me! No matter what!"
Advertisement:

One of the tentpoles of the Yu-Gi-Oh! franchise, Yu-Gi-Oh! Duel Monsters (or simply, Yu-Gi-Oh! outside of Japan) is the second anime adaptation of the manga series by Kazuki Takahashi. Adapting the manga's story from volume 8 onwards, the series was produced by NAS and animated by Studio Gallop.

In addition to disambiguating itself from the previous anime series produced by Toei Animation (nicknamed "Season Zero" by some fans), the "Duel Monsters" subtitle was also used to demonstrate the elevated prominence of the card game.note The manga was also given the subtitle of Duelist in English localizations corresponding to these storylines. The series is sponsored by Konami as a successful attempt to retain the license to the card game, stripping it away from Bandai, which failed to capitalize on the manga's card game with Toei's adaptation.

In addition to spawning a metaseries of anime spinoffs, Duel Monsters also inspired the anime-exclusive Yu-Gi-Oh! The Movie: Pyramid of Light and Yu-Gi-Oh!: Bonds Beyond Time films. The third movie, Yu-Gi-Oh! The Dark Side of Dimensions, was written to take place six months after the manga continuity and was the first anime adaptation with direct involvement from Takahashi.

The dub is available on

and is now starting to appear on

Netflix while the subtitled version is available on

It's time to trope!:

Bakura and the Puzzle Piece

Yami Bakura hides a portion of his spirit inside the Millennium Puzzle.

Bakura and the Puzzle Piece

Yami Bakura hides a portion of his spirit inside the Millennium Puzzle.