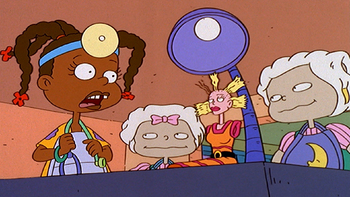 "My mommy read me the Hippopotamus Oath and everything. I'm a Toyologist."
Ray: "Washcloth."
Slimer: "Washcloth."
Peter Venkman: "Powder."
Slimer: "Powder!"
Ray: (after a bit of coughing and sneezing from everyone) "Fresh diaper."
Slimer: "Fresh diaper."
Ray: "Okay, I think we can close it up now."
Peter Venkman: "Congratulations, gentlemen; the operation was a success!"
— The Real Ghostbusters, "Three Men and an Egon"
Advertisement:

The doctor calls out for tools, which their assistant hands to them one by one. Another assistant wipes sweat off the doctor's brow. The patient's heart rate drastically increases, and then...Flatline. The doctor sighs and says "We did everything we could." The camera pans away to reveal...a broken TV?

This is when any situation other than a real surgery (pretend ones can count) is nonetheless treated like one. It seems to occur most often when characters are trying to fix an inanimate object. It might turn out to be this trope if:

If grieving occurs afterwards, it might be Mourning an Object. If doctors are using Noodle Implements in a real surgery, that's Meatgrinder Surgery. Compare Not Really a Birth Scene.

The Trope Namer is "Weird Al" Yankovic's parody of Madonna's song, "Like A Virgin."