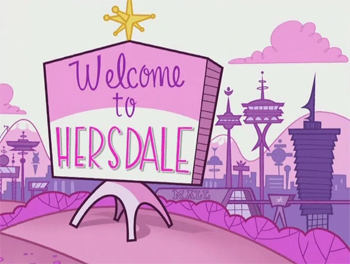 "I only wish the capitol of Sweden was Swedeville, and the capital of Greece, Greekborough."
— Terry, Fattypuffs and Thinifers
Advertisement:

In Real Life, cities and locations are named after historic events or persons, landmarks, local folklore or other things, that explain their names somewhat. These names change and evolve over the time and are a direct result of the history revolving around them.

In fiction, however, such immense back stories rarely exist, so the writers have to make up names on the spot, and quite often these names lack a certain creativity.

Instead of genuine, unique names, we get locations with names consisting of just a noun and a variation of City behind them, that are named after the species that inhabits it, after nearby landmarks, or the main purpose they serve. In other words, Exactly What It Says On The Sign.

Sometimes, the writer tries to conceal it a bit, with names that are puns on plot points or characters, or the translation thereof in a foreign language.

This also can cover celestial bodies. Related to Premiseville and Theme Naming.