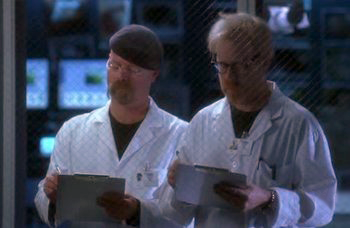 In media, there are two sorts of people who wear labcoats: scientists and medical doctors. As such, a character wearing a lab coat is a good indication that they're involved in either science (and/or Mad Science!), or a medical field. This is despite the fact that in real life doctors and scientists do not normally wear such coats unless there is a reason that they need to keep their clothes clean, and should definitely not wear them in public because they might expose people to dangerous substances. In media, this coat is almost always white. In Real Life, labcoats are often white, but also come in blue and green. These colors show stains well, which is the point - you need to know when to wash your coat.

A subtrope of the Labcoat of Science and Medicine is the Mad Scientist Lab Coat which is typically the Howie-style lab coat with the asymmetrical front panel and the high, stiff collar. This style of full-coverage lab coat, designed to minimize pathogen contact with street clothing, has long been associated with esoterically-minded scientists from Dr. Frankenstein to Dr. Horrible, and is pretty much a clear sign that its wearer doesn't care about such silly things as medical ethics boards while he Gets Shit Done. (It probably helps matters that to many viewers this style subliminally suggests a straitjacket.) Another marker of Science-Related Memetic Disorder is when the coat (Howie-style, or otherwise) is particularly ragged, tattered, stained with unknown substances and full of holes burned by acid, lightning or god knows what else; this is a clear sign that the wearer experiments with dangerous stuff, doesn't care about either safety or appearance.note In Real Life, scientists tend to replace damaged coats with new ones as soon as possible. However, if the coat is only stained with a non-dangerous substance, it can remain for quite some time. Chemistry students, however, may wear ragged, iodine-stained coats because they have no money or time to replace them, or because they're students, or because everyone whose first choice to study was chemistry is a Mad Scientist at heart anyway.