Literature / How to Be Comfortable in Your Own Feathers 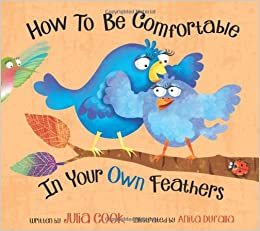 How to Be Comfortable in Your Own Feathers is a children's book by Julia Cook about accepting yourself for who you are, and about how you shouldn't try to change who you are with an unhealthy lifestyle.

It follows a small, blue bird of indeterminate age, gender, name, and species. All the birds in its class want to be able to fly the way a popular hummingbird does, but they can't, and so she condescendingly suggests they lose weight.

The bird decides to try and lose weight by eating less and going to the gym, but it's bad for the bird's health. Then, its mother tells it that it shouldn't change who it is and the bird gets training to help deal with its "food voice".

How to Be Comfortable in Your Own Feathers has examples of