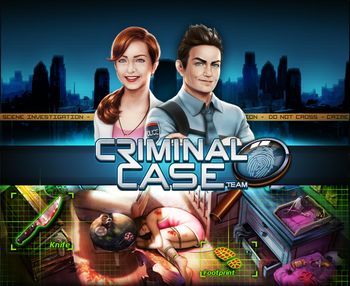 Criminal Case is a Flash-player Puzzle Game which was developed by Pretty Simple Games and released on November 17, 2012, designed in the mold of the CSI series, and available for play through Facebook. Specifically, it's a Hidden Object Game which hides all sorts of objects inside various crime scenes.
Advertisement:

The game is played by more than 10 million users through Facebook, and has gotten over 36 million "likes" on the same site. Additionally, as of December 2013, Criminal Case has been named the Facebook Game of the Year 2013. In July 2014, an iOS version was developed.

Not to be confused with Criminal Minds.

For those who are currently playing the game, SPOILERS ABOUND.

Seasons in the game

Tropes about the series: