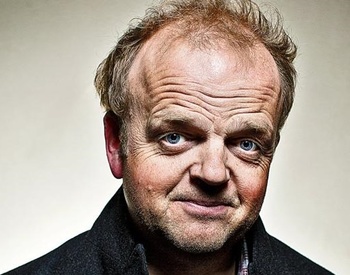 "I work best when a little scared, when there's so much more than the lines to think about."
Advertisement:

Toby Edward Heslewood Jones OBE (born 7 September 1966 in London, England) is one of England's most prolific and recognizable character actors. Chances are that he's appeared in some of your favorite movies and TV shows. He's best known as the self-harming elf Dobby in the Harry Potter films, Claudius Templesmith in The Hunger Games movies, Dr. Arnim Zola in Captain America: The First Avenger and Captain America: The Winter Soldier, Percy Alleline in Tinker, Tailor, Soldier, Spy, the scene-stealing Dream Lord in the Doctor Who episode "Amy's Choice", and Culverton Smith in Sherlock.

He is the son of actor Freddie Jones.