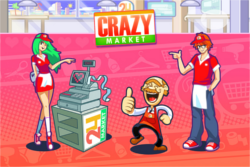 A free, downloadable game app for PlayStation Vita and Google Play. Developed by a Paris-based game company, THE GAME ATELIER

There are three specific types of level.