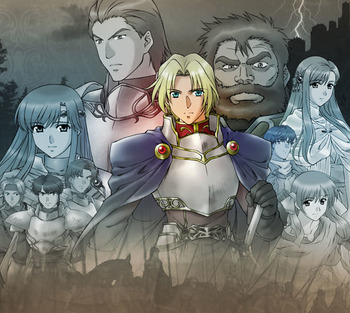 "For many ages, war has raged across this land. It was once ruled by a vast empire called Lazberia. The god-kings of Lazberia built their empire on the blood of enslaved citizens. For centuries, it stood untouchable. Yet still, time brought it to ruin...but the people lived on. From the ashes of Lazberia, they built two great nations. One, the Empire of Raze. The other, the Kingdom of Veria. But neither could accept the other. Endless blood was shed in the name of a holy war. Chaos, slaughter, destruction, and hate consumed the minds of the people.And now, a young man comes of age in these chaotic times. Perhaps he can be the hero this land urgently needs..."

Tear Ring Saga Series: Berwick Saga Lazberia chronicle chapter 174 is a 2005 video game created by Shouzou Kaga, the creator of the Fire Emblem series, and his company Tirnanog for the Playstation 2. The legal mess caused by TearRing Saga prompted him to radically change his SRPG formula into his next game. The result is a vastly different and complex game while maintaining the superficial elements to the Fire Emblem series.

The story of Berwick Saga takes place in the continent of Lazberia, in the same world as Lieberia from Tear Ring Saga, but roughly a millennium after the events of that game.

Mordias's son and successor King Volcens flees with his court to the Duchy of Narvia, the land of his loyal vassal Duke Roswick, where he attempts to rebuild the Berwick League and prepare for a counterattack against the Raze Empire. Volcens calls across the land to all remaining loyal members of the League to join him in his fight. In answer to the king's call, Reese, the son of a nobleman in the frontier lands of the Kingdom of Veria, arrives in the Duchy of Narvia with a small company of knights. However, beset by enemies both external and internal, the revitalized Berwick League is in danger of falling apart once more.

While officially a sequel to Tear Ring Saga, the games are not significantly related by plot and barely resemble each other in terms of gameplay.

An English fan translation has been completed, and you can grab it here