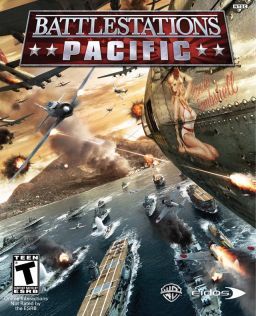 "We didn't start this war. But we'll damn well finish it..."
THE WORLD IS AT WAR
TWO MIGHTY NATIONS...
...CLASH FOR SUPREMACY
FIGHT WITH HONOUR
CONQUER THE PACIFIC
PLAN EVERY MOVE
TAKE CONTROL OF THE THEATRE OF WAR
100 AIR, SEA, AND UNDERWATER UNITS
FROM THE DEPTHS OF THE SEA
AND ABOVE THE CLOUDS
FIGHT THE BIGGEST AND FASTEST WAR MACHINES ON SEA
THE WATERS WILL TURN RED
RELIVE THE WAR
OR REWRITE IT
THE REST IS HISTORY
- Launch Trailer
Advertisement:

Battlestations: Pacific is an action and Real-Time Tactics game by Eidos Interactive, released on May 12th, 2009 for PC and Xbox 360. It is the sequel to the 2007 game Battlestations: Midway.

In this game, players control a number of different air and sea units from both the United States and Imperial Japan during World War II in the Pacific. The Single-Player mode is divided into the American and Japanese campaigns. The former is mostly the same as to how the battles went historically, beginning with where Battlestations: Midway left off.The latter, meanwhile starts out similarly, with the attack on Pearl Harbor going off as planned, but then shifts into a What If? scenario starting with the Midway battle.

Thanks to Games For Windows Live's shutdown in 2013, the multiplayer portion of this game is more-or-less dead. Unfortunately for users of the PC version, this means that the Downloadable Content (which is only available through the aforementioned service) for this game is inaccessible.