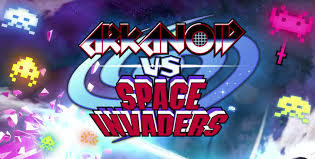 Arkanoid vs. Space Invaders is a free-to-play mobile game developed by Taito. The game is a crossover of Arkanoid and Space Invaders as it combines elements of both games. While service for the game had ended in Japan in 2016, the game was later re-released worldwide, though now as a paid game, on May 17, 2017.