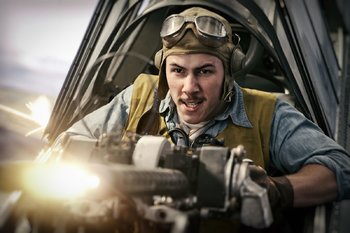 He or she may be called the Radar Intercept Officer ("Rio"), the Tail Gunner, the Navigator or the Weapons Systems Officer ("Whizzo"). However, they all do the same job, acting as a Mission Control in the back seat (or sometimes in the right hand side seat) of the Ace Pilot's own fighter or attack aircraft. They don't usually fly the aircraft (they're often not qualified to), but instead notify their boss of approaching fighters, surface-to-air missiles etc. Having an extra pair of eyes helps a lot. They also help in more technical matters such as attending to the vehicle's operational systems, freeing up the pilot to concentrate on piloting and combat.

Their position is useful for comedy, as they can throw up in particularly vicious maneuvers. It also allows for a major sense of danger — they can be hit in a fight and create a time-sensitive element to the mission. The position is also useful in general for giving the pilot somebody to talk to without necessarily needing another plane nearby, similar to cop shows where two cops always ride in a car together (even though the vast majority of police forces don't have enough manpower to put two cops to each car). They can also highlight the drama of fight scenes when enemies approach, the back guy races through the craft's combat analysis computer to identity them and reacts with alarm as he realizes what they are taking on. The back guy can also be working the craft's operating maintenance systems to attempt to keep the craft operating even as the pilot is pushing the envelope trying to keep them from being shot down.

Not many contemporary real-world fighters or aircraft have these,note (excepting dedicated training variations of common aircraft) but they were once common. The F-14 and F-4 are arguably the most famous examples, inspiring many others. Named after real military terminology, where the radar officer was called this or simply "GIB". The Ace Pilot would be the FUF, or "Fucker Up Front".

If an Ace Pilot doesn't have a Guy in Back with whom to exchange witty banter, the "sidekick" role will probably go to their Wingman, a fellow pilot in a supporting position. In Speculative Fiction, the role may be filled by a talkative computer, ranging from Robot Buddy ("Tracking multiple targets, bearing one-seven-five-mark-one-niner") to glorified warning light ("Altitude. Altitude. Altitude...") - though they have that one today.

Note that for many Attack Helicopters with tandem seating, the trope is inverted - the Guy In Back is actually the pilot, with the person up front responsible for manning the weapons. Not to be confused with Soldiers at the Rear; these guys may be in back of the plane, but they're still at the frontlines engaging in direct combat with the enemy.

Subtrope of Sidekick. Compare Target Spotter, which a few of these guys may be.