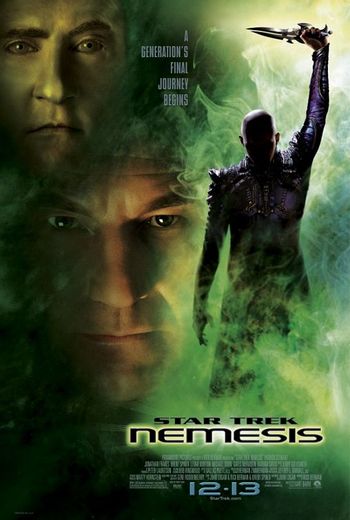 "Just when I thought this couldn't get any worse..."
Janeway: Jean-Luc, how would you like a trip to Romulus?
Picard: With or without the rest of the fleet?
Advertisement:

The One With… Picard’s younger evil clone.

Star Trek Nemesis is the tenth movie in the Star Trek film series, released in 2002, and serves as the big-screen Grand Finale for the Next Generation crew. It is directed by Stuart Baird, with the screenplay by John Logan, Rick Berman and Brent Spiner, who also played Data.

After a coup, the new leader of the ever-secretive Romulan government makes an offer of peace to The Federation. Our heroes find out that this new leader, Shinzon (Tom Hardy), is a younger clone of Jean-Luc Picard (Patrick Stewart), the by-product of a botched Romulan plot. At first, Shinzon's intentions seem honest, but they quickly turn malicious for convoluted medical reasons. There's also a subplot about a prototype of Data, B-4 (Spiner), which serves as a counterpoint to Picard's identity struggles. See here for a more detailed recap.

The film was released on December 13, 2002 in North America.