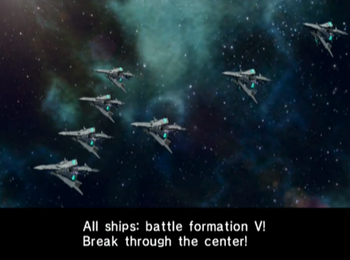 When the good guys are in The Army, part of The Squad or even on a spaceship, they're bound to get into a lot of fights, and what better way to show that you take this seriously than by going into Attack Pattern Alpha? Attack patterns are a convenient way of saying, "the good guys attack the bad guys and they know what they're doing," without going into detail that would bog down the action.

Attack Pattern Alpha has almost as many names as Gandalf; usually it's a Greek letter followed by a number, and possibly a color. For a team, it usually involves choreographed moves with all team members going into stock poses with their weapon of choice, perhaps with an All Your Colors Combined thrown in for good measure. For less colorful occasions, it will be all team members attacking from different directions or even feinting to distract an opponent.

Spaceships or fighter planes will usually go into a formation, do some fancy flying and shoot to blow stuff up. This can get hilarious if the show heavily recycles footage, as last week's Wronski Feint can become tonight's Attack Pattern Alpha.

Related to Time for Plan B and Police Code for Everything. If done excessively, this can become Calling Your Attacks. Not to be confused with Alpha Strike.