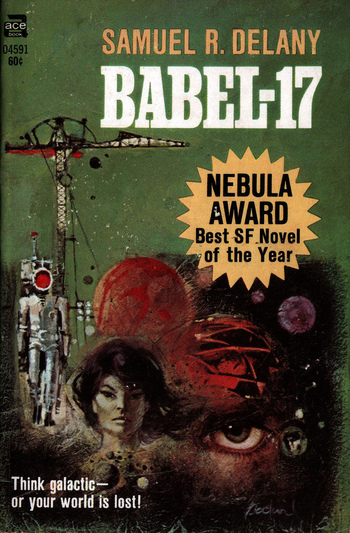 If there's no word for it, how do you think about it? And, if there isn't the proper form, you don't have the how even if you have the words.
Advertisement:

Babel-17 is a 1966 Science Fiction novel by Samuel R. Delany, which explores the relationship between language and thought.

Rydra Wong is a top linguist, acclaimed poet, and former military cryptologist. When the Alliance military come across a new code used by the enemy, which is beyond their ability to crack, they come to her for help. She informs them that it is not a mere code, but an actual language, and agrees to accept the challenge.

Quickly assembling a crew, Wong heads to the Alliance War Yards to study the raw data on this new language, which the military calls Babel-17. However, shortly after she arrives, an enemy attack forces her to flee in disarray, and she falls in with a privateer, who is, fortunately, on the Alliance side. Or mostly so.

On board the privateer's ship, she begins to learn more about Babel-17, and the surprising benefits and dangers it offers to someone who learns to speak it.

The novel earned Delany the first of his several Nebula Awards.