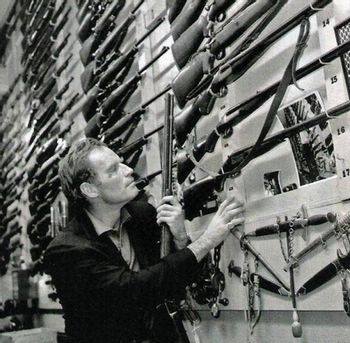 The late Charlton Heston's private collection. He liked knives, too.
Tank: All right, what do you need, besides a miracle?
Neo: Guns. Lots of guns.
— The Matrix
Advertisement:

How do you show that someone is a Gun Nut, a Crazy Survivalist, or just plain needs to be taken seriously? One simple and easy method is to show them with an enormous collection of weapons. This can range from a literal wall covered with weapons, to a pile of various weapons laid out on a table or floor, to a shot displaying an arsenal of guns and other weaponry on their person. Generally, any shot or scene displaying an enormous range of firepower, intended to show how well-armed and/or Crazy-Prepared a person or group is, fits under this trope. Note that there will rarely be any sign of sufficient quantities of ammo to load all of these marvelous toys. Any properly equipped Super Multipurpose Room will have at least one of these in one of the secret compartments.

On the other hand, sometimes these weapons may just be there for show. For example, in a modern setting, a collector of pre-industrial weapons is likely to be some variety of nerd or geek — perhaps an antiquarian Absent-Minded Professor with a passion for historical artefacts, or a Basement-Dweller trying to look badass. In the case of a Basement-Dweller, the weapons in question tend to be cheap replicas, often obtained from dubious sources (who might be peddling their wares at the local flea market or Renaissance Fair) and/or ostensibly Japanese in origin.